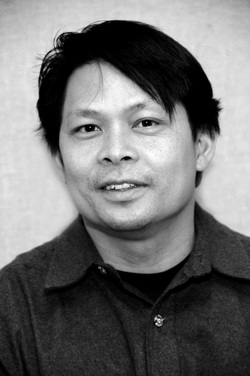 HAROLD TAW is a novelist, playwright, screenwriter, and layabout multi-form writer. His debut novel was Adventures of the Karaoke King (Lake Union Publishing 2011). His writing has been featured on NPR, in a New York Times bestselling anthology, and in The Seattle Times; his screenplay Dog Park has garnered recognition in domestic and international film festivals and competitions. Harold wrote the book for two musicals presented as staged readings by The 5th Avenue Theatre: the full-length Persuasion: A New Musical (2015), based on Jane Austen’s final novel, which also had a workshop reading at Texas Musical Theatre Workshop; and the original one-act The Missed Connections Club (2014), which won Third Place in the 2015 Frostburg State University One-Act Competition, was a finalist in the Arts Club of Washington’s 2014 One-Act Play Competition, and was longlisted for the 2015 British Theatre Challenge. Persuasion had its world premiere in Seattle in Aug. 2017, becoming the highest grossing show in Taproot Theatre Company's 40-plus year history; it had its California premiere at Coronado's Lamb's Players Theatre in 2018. Harold is currently developing IN A BETTER WORLD: A Multiverse Musical, in which the protagonist traverses three alternative histories of 1920s England—as French vassal, Chinese protectorate, and steampunk island—in search of a place where he and his true love won't be separated by race, class, and sexual inequality. For five years, he co-curated WordsWest Literary Series, which brought world-class poets and writers to West Seattle's treasured C&P Coffee Company. A Yale Law School graduate and a Fulbright Scholar, Harold’s research and writing have been supported by, among others, 4Culture, 826 Seattle, Artist Trust, Centrum, the Helen Riaboff Whiteley Center, Humanities Washington, Jack Straw Productions, and Wing Luke Museum.

PRAISE for Adventures of the Karaoke King
"[T]he author...offer[s] telling commentary on various facets of modern American culture. Chief among the targets of his poison pen are consumerism, the tawdry accoutrements of tourist stops in the Southwest, corporate destruction of unique establishments in a quest to MacDonald’s-ize commercial success, self-help gurus and the insanity of the justice system that demonizes immigrants.... As Harold Taw offers an imaginative and engrossing tale, he asks an intriguing question: 'Is it possible to leave behind who you are for what you might become? That’s the promise of America.'"
---Kathleen Daley, The Star-Ledger (Newark, NJ)

... and CONDEMNATION
"I have to say this may be the bleakest, grimmest book I've read in a very long time... I was left in the grip of an overwhelming sense that perhaps this is indeed all there is to life in America... [I]t left me with a sense of unease that took a long time to wear off. Disturbing, is how I guess I would rate my overall opinion of this book."
---Amazon.com Customer Review